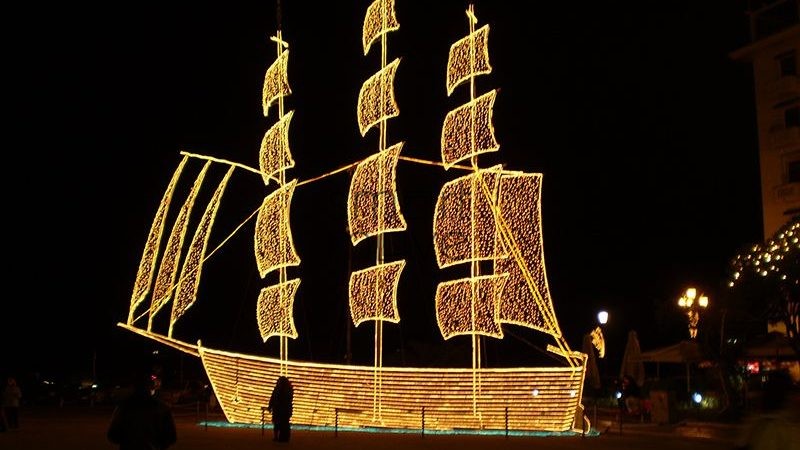 Christmas and New Year arrived and the world got ready to celebrate. In this blog post we are going to show you the countries that most prepared for these dates and are fans of the lights, this is how their cities look beautiful and these days they are celebrating. Here are some examples:

The “Christmas ships” or Karavaki in Greek, spread throughout that country during the Christmas holidays. Greece is one of the most famous Mediterranean countries and where nautical history is deeply rooted in culture and popular traditions. Long ago, when sailors returned home after long months on the high seas, their wives gave them miniature ships as a welcome gift.

We can see colossal Texan boots that measure more than ten meters high and belong to the North Star Mall in the city of San Antonio, Texas. This monument in honor of the quintessential symbol of the largest southern state in the United States, takes on a very Christmas look at this time. During the holidays, the boots are illuminated with star-shaped lights and other giant decorations that attract the eyes of everyone. It can be said that, in San Antonio, there is no Christmas without these gigantic boots full of light.

The Christmas season is a wonderful time to visit London.

During Christmas, New Years, and other winter holidays, the city’s historic commercial district, Oxford Street, is fully illuminated with beautiful light installations that are sure to wow any visitor.

New York City offers a plethora of holiday light displays, from the giant tree in Rockefeller Plaza to the lights on Fifth Avenue, in addition to the glittering window displays in all the big box stores.

The light show, which will last until January 7, 2021, was inaugurated by the Valencian dancer Sol Picó in the Plaza Comercial, in front of the Born Center for Culture and Memory. As a novelty, this year 2020 is the first in which Plaza de Catalunya, as well as Calle de Balmes, have lighting.

In Budapest, Christmas begins with the trams and their illuminated decorations and ends at the Basilica tree, one of the most beautiful Christmas trees in Europe. And in between you have Christmas markets, such as the one in Vörösmarty, ice rinks, thermal baths in the outdoor pools of the Széchenyi Bath and even performances of classics at the Erkel Theater, such as The Nutcracker.

Brujas is one of those cities that seems to have been frozen in time. If it is already magical in summer for example, you cannot imagine what it is like to walk through its streets at Christmas time. The medieval air of its buildings, the lights on its facades, its Christmas market, its decorated ice rink. Everything will awaken your Christmas spirit so that you can once again enjoy a December full of illusion as a child.

Where do you live? How is your city decorated? Tell us so we know the traditions of different parts of the world!