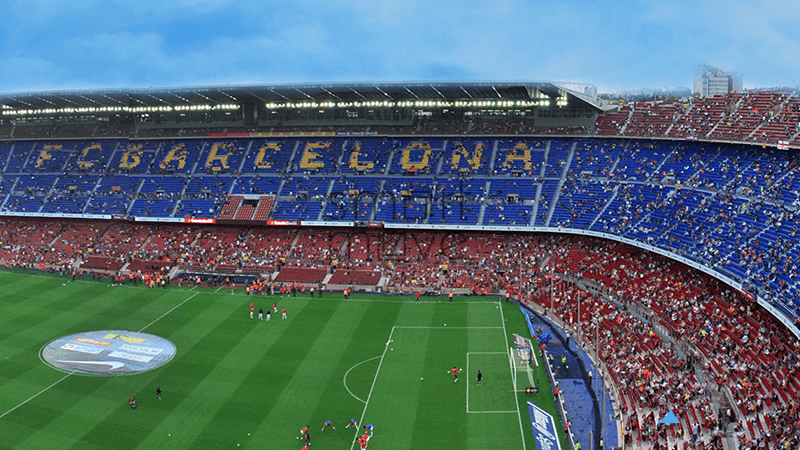 Do you like football? Are you a Barca fan? Camp Nou is one of the most touristic places in Barcelona. It´s the stadium of F.C. Barcelona that is located in the Les Corts district of the city. This is the place you definitely must visit during your stay in Barcelona!

The F.C. Barcelona football team is one of the best and most famous football clubs in the world, that’s why millions of people travel to the city just to watch a game. In this blog, we are going to explain the Camp Nou Experience! A very fun visit to make with friends or the guys in your family…

The largest stadium in Spain and Europe, is prepared every day to receive many tourists. What’s included in the tour? The visit to the Camp Nou lasts between an hour and a half and 2 hours, you will walk through its lawn, the bank of the players and its stands passing through the changing rooms, the press hall, its chapel and finally its museum and the shop of the club. Super important places for a football fan.

The tour ends visiting the F.C. Barcelona Megastore, the favorite place for football fans to go shopping. It is the official merchandising store of the club. Inaugurated in 2014, it is the official store of the biggest football club in the world. You can buy the official shirts, hats, balls, or any souvenir object you can imagine. Now would you like to buy a Messi or Pique shirt? The ticket includes stadium tour and a visit to the Barcelona Museum.

Metro: L5: has several stops near the stadium, specifically Badal and Collblanc.L3, the stops of María Cristina, Palau Reial and Zona Universitària are not far away either.